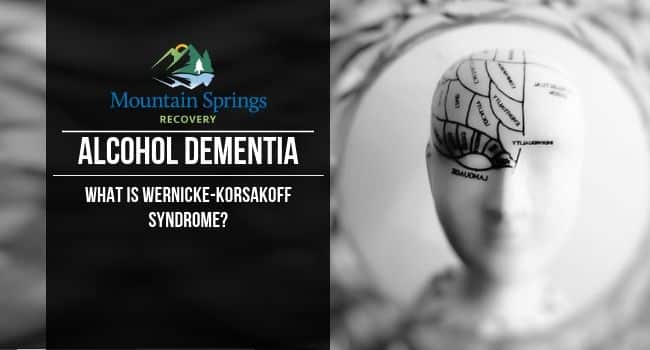 Alcohol Dementia: What Is Wernicke-Korsakoff Syndrome?

Brain damage can be done with excessive alcohol drinking throughout the years. Mental confusion is common in those that drink alcohol excessively while drinking, but even when they stop drinking, memory may be lost because of the drinking. ARBD or Alcohol Related Brain Damage covers a series of conditions that are caused by this type of alcoholism. Wernicke-Korsacoff Syndrome and Alcohol Dementia are both conditions that are under the umbrella of ARBD. More specifically, Wernicke’s encephalopathy is caused by having a vitamin B1 deficiency in the system.

It is also important to note that even though this is known as an Alcohol Dementia, it is not actually a dementia or Alzheimer’s related condition. It is a condition that a person can completely heal from. The term dementia came from the fact that it does share similar characteristics and symptoms as dementia in Alzheimer’s patients.

The person who gets this condition does not have to be an alcoholic, though the symptoms are generally seen in those that do undergo heavy drinking. There are classic symptoms that come with this condition, and they include, but are not limited to:

In extreme cases, coma can occur in a person suffering from this disorder. Wernicke-Korsacoff Syndrome’s and Wenicke’s encephalopathy symptoms may be long-lasting and even permanent.

Diagnosing Wernicke-Korsacoff Syndrome can be difficult to do. This is often a missed diagnosis, as the symptoms that present themselves are often the same symptoms that are seen in anyone that has a serious drinking issue.

A physical exam is the first to be done. Those that present themselves with a red “beefy-like” tongue, as well as the symptoms that have been stated above. These symptoms are all indicators that the patient may be presenting with Wernicke-Korsacoff Syndrome. However, not all symptoms have to be noticed, and some may indicate the condition.

Skin changes are often seen during the physical inspection, but blood tests should also be conducted to find out the liver functions of the patient, as well as blood cell counts and electrolyte levels. MRIs are often given if the syndrome is being considered because it can show shrunken mammillary bodies. This can also show other changes in the brain that are happening, and are being caused by the syndrome.

The person’s sense of smell may be diminished and in some advanced stages of this disease the person can fall into a coma. This is why it is important to catch the symptoms and get a diagnosis early on.

When these symptoms are noticed, Wernicke-Korsakoff Syndrome should be considered as the condition the person is suffering from.

Although this condition is completely treatable, those that do not get early care or a diagnosis can find themselves falling into a coma and sadly, 10 to 20% of those with the condition will die. This is a relatively high death rate for this type of condition, but it is mostly because it is a hard to diagnose and rarely diagnosed medical condition.

This is why it is crucial that those that think they may have Wenicke-Korsakoff Syndrome seek out the appropriate medical attention. Bringing this diagnosis up to the doctor may provide them with a basis of what to look for.

Treatment is usually done through Thiamine replacement therapy. If caught early enough, this therapy can be enough for the person to bounce back. Alcohol consumption has to stop for the treatment to be successful though, so usually the patient has to detox and go through a therapy program that provides ongoing support and help.

Those who find the right help early on can find themselves regaining and learning those simple tasks that they once knew. However, if the disease has progressed then memory and other gait issues might not be able to be recovered even after drinking cessation and Thiamine treatment.

Oftentimes, a lot of people continue to have issues even after therapy and treatment because they refuse to stop drinking alcohol. This is due to having a dependency on the substance for such a long amount of time. Seeking medication and other forms of drinking cessation aids may help prolong life and help reduce the amount of symptoms seen with the Syndrome.

The causes of Wernicke-Korsakoff Syndrome vary, but the most common cause is alcohol abuse, especially in those that have abused the substance for many years. Other causes have nothing to do with alcoholism, and can be directly related to having AIDS, kidney dialysis, chronic infections, cancer, and the inability to absorb nutrients from foods.

Another case that brings about Wernicke-Korskoff Syndrome is from those that go on extreme diets. This is because the body is not getting enough nutrients that it needs from a normal diet. Anything that causes the body to lack in nutrients can cause the body to go through this Syndrome, as well as a host of other conditions.

WKS has also been seen in patients that have undergone bariatric weight loss surgery. This is due to the sudden loss of nutrients when severely cutting back on the diet that a person had once consumed. Due to having a smaller sized stomach, the person can only have light foods in moderate amounts. Thus, starving the body from the previous nutrients and putting it in a deficit.

Caring for a Person with the Syndrome

Sometimes, the person with this syndrome, if it has gone on for too long, requires care and attention from others. The person who has this syndrome should never be left unattended due to their memory loss and awkward movements. They may end up disoriented and become hurt, or wander off somewhere and not be able to find their way back.

It is important that you work with their physician to come up with a personalized care plan that works with their unique diagnosis. There are many precautions that need to be taken in order to provide safety for the person going through this. While the memory loss might be short-term and temporary, it is important that during this time, the person is kept safe.

It is important to keep calm while talking with someone who has this disorder, as they can become agitated easily. They become frustrated when they are trying to tell the person what they want or where they want to go, but they are unable to remember bits and pieces. Staying calm and assuring them that this is okay and to take their time can help them gather their thoughts easier and more efficiently without losing their temper.

Label drawers and cupboards, and leave notes around so that they know where and when things are. Simple examples include: dinner is at 6PM or brush your teeth at 8PM. You can use pictures on the drawers to show the person what is inside them. This way, there is no question to where everything can be found throughout the home. It makes things easier for them, as well as for the caregiver.

Those who are caring for a person who has WKS should consider hiring on a professional caregiver, as well as a psychologist, neurologist and physician. Together, these professionals can provide the necessary help and support that is needed to get through this tough time.

These professionals can not only provide more information on the condition, but they can also provide more support to those in the family that may feel resentful towards the person they are caring for due to their excessive alcohol abuse. This puts a strain in the family that wouldn’t otherwise be there. Caregivers can help the person taking care of someone with WKS take care of themselves, as well and not constantly provide care to this person with the syndrome that needs constant supervision.

The physician that diagnoses WKS in a person can also provide a list of providers and other professionals that can provide support and medical care should it be needed. Helping the person go back to their former self is the goal when caring for someone with WKS.

Those who are an alcoholic have a higher chance of having this specific disease, which is why it is known as alcohol dementia. This is why when symptoms of the disease are noticed, the person should receive the proper medical attention before they become worse, as the prognosis for those who receive immediate medical attention and stop drinking are excellent. Those who ignore the symptoms only find themselves staying the same, or becoming worse.