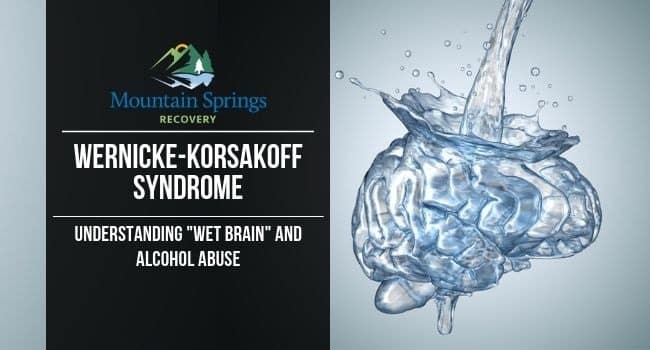 Wernicke-Korsakoff syndrome, also known as wet brain, is a combination of two diseases: Wernicke encephalopathy and Korsakoff’s psychosis. People develop Wernicke-Korsakoff syndrome due to the lack of thiamine, also known as vitamin B1. About one to two percent of people in the U.S. develop this disease, with men between 30 to 70 years old slightly at more risk than women of the same age group.

It’s worth noting that Wernicke-Korsakoff syndrome can occur for any reason that leads to vitamin B1 deficiency. Examples include bariatric surgery, gastric cancer or issues with the stomach and intestine that make it difficult to absorb nutrients.

While the two are separate conditions with a different set of symptoms, Wernicke encephalopathy and Korsakoff’s psychosis often develop concurrently. Below are the symptoms for both conditions:

Of note, after a person is diagnosed with both conditions, they are also at risk of falling after passing out, suffering heart problems due to rapid heart rate and low blood pressure when standing.

While there are rare instances in which a person may be cured of the disease without seeking treatment, the person runs the risk of permanent damage to the brain which can lead to death. Untreated Wernicke-Korsakoff syndrome could result in:

The National Institute on Alcohol Abuse and Alcoholism revealed brain damage from Wernicke-Korsakoff syndrome correlates to how much and how frequently a person drinks. The age the person started drinking along with how long the person has been drinking plays a role as well, along with a person’s gender or age. People who have a family history of alcoholism are also more likely to develop the disease. In addition, people who were exposed to alcohol while in the womb have a greater chance of developing Wernicke-Korsakoff syndrome.

It’s also worth understanding the relationship between thiamine and alcohol. When someone excessively and consistently drinks alcohol, it interferes with how thiamine is absorbed by their gastrointestinal tract. As a result, the liver has a difficult time storing the vitamin. Due to the lack of thiamine, the organ system has a difficult time functioning, especially the brain.

There are several procedures involved when diagnosing Wernicke-Korsakoff syndrome. They include:

Many people who are diagnosed with Wernicke-Korsakoff syndrome require treatment in an institutional setting like a hospital. Proper treatment can take years and require extended periods of sobriety.

Typically, people with Wernicke-Korsakoff syndrome who get medical treatment will receive thiamin and magnesium through the vein. After proper treatment, patients should see improvement within two to three weeks. Although there are other forms of treatments, the most effective concurrent method should be ending physical dependence on alcohol so the person can remain sober while recovering from Wernicke-Korsakoff syndrome.