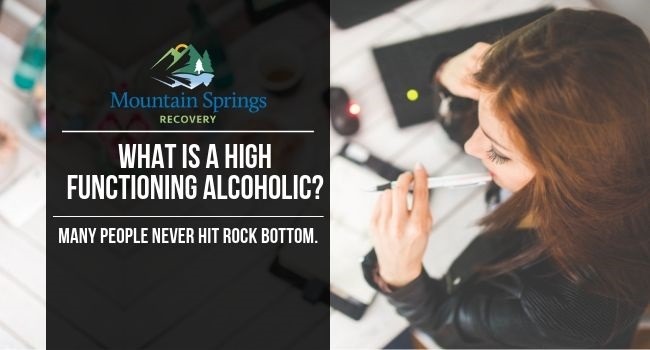 What is a High Functioning Alcoholic?

You might think people suffering from an alcohol addiction would eventually hit rock bottom. However, this is not true. Many people never hit rock bottom. They hide their addiction and keep it secret. These people believe they can control the amount of alcohol they consume. This leads to many people becoming an alcoholic as well.

Most people who consume alcohol believe that if they aren’t seeing any of these issues occurring, then they should not be considered an alcoholic. However, if you are in this group of people you should know there is a risk that you are a high functioning alcoholic. In addition, the side effects from excessive drinking of alcohol might not catch up to someone until they are much older. This is when chronic alcohol abuse often takes its toll on a person’s heart, liver, and even brain.

A functional alcoholic is sometimes referred to as a working alcoholic. These people might drink a little throughout the entire day, but not enough to get totally drunk. They just drink what they need to stop their alcohol cravings and keep away any alcohol withdrawal symptoms. In some cases, they don’t even drink during the day, but binge heavily during nights and on weekends. Alcoholism is a disease. It causes a person to drink excessively without acknowledging the health, legal, or social repercussions of drinking too much alcohol. Regardless, people who can keep jobs, deal properly with friendships, and never drive while drinking can still have an alcohol addiction, just like people who drink and have these issues.

Signs of a High Functioning Alcoholic

People who have an alcohol use disorder are not categorized in a high functional or dysfunctional placement status. Matter of fact, every individual faces their own type of symptoms because every person has their own personal experience with the substance. According to several studies and research by the National Institute on Alcohol Abuse and Alcoholism there are five types of alcoholics.

Dr. Howard Moss, associate director for NIAAA clinical and translational research said the their findings could help break down the common notion of the typical alcoholic. He further stated that they find that young adults are the biggest group of alcoholics in this country. In fact, almost 20 percent of alcoholics are highly functional. They are well-educated and have a good income.

It is often hard to recognize a functional alcoholic because they do their very best to keep their alcohol addiction a secret. Sometimes, this is due to the fact they are ashamed of themselves and their addiction. Many times it is because they are unable to bring themselves to ask for the help they need to overcome their addiction. In most cases, only a few very close family members, spouses, or friends can see the signs indicating their loved one is struggling with an alcohol addiction. If you are afraid that your loved one may be addicted to alcohol, some of the signs to look for include the following:

Besides these signs, functional alcoholics often take high risks which may include the following:

One of the common misconceptions regarding functional alcoholics is that these people never have issues or problems in their life. This is not true. There are always consequences associated with alcoholism. Eventually, somewhere in life, excessive drinking will catch up to you. It will affect your body, soul, and mind.