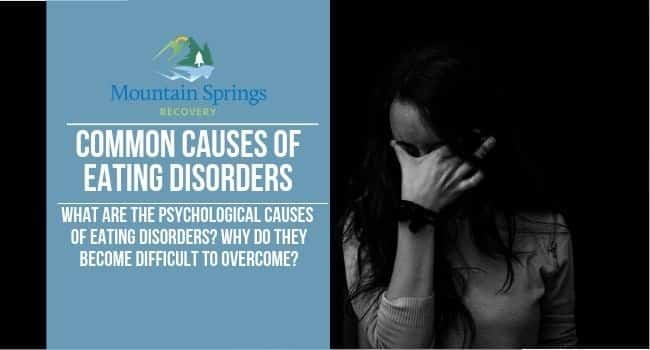 Why Eating Disorders Can Be a Struggle to Overcome

Just like other forms of mental illnesses, eating disorders can often be under-diagnosed because of the stigma that surrounds them. What are the psychological causes of eating disorders, and why do they become difficult to overcome? Read to find out more.

Eating disorders such as anorexia nervosa, bulimia, or binge eating are considered mental health issues according to the Diagnostic and Statistic Manual of Mental Disorders (DSM-V). Although many of its complications manifest physically, eating disorders result from a myriad of internal and external causes which depend on the individual suffering from it.

What are the common causes of eating disorders?

Some individuals are predisposed to have eating disorders. At some point in their lives, those who have particular genotypes can be more prone to having mental health conditions. Research shows that eating disorders can run in the family, such as a mother who suffered from anorexia during her teenage years, and eventually having a daughter who may go through the same condition as she reaches her teens.

Individuals who have family members who are suffering or have suffered from eating disorders are 10-12 times to be likely diagnosed with the condition in their lifetime.

Another common cause of eating disorders, especially with women, is their personality or temperament. Many women have body image issues, causing them to obsess over small details of their appearance. They may be extremely conscious of how people view them and how they view themselves, making them develop a perfectionist personality.

This ‘perfectionist’ mindset may contribute to developing unhealthy habits towards diet and exercise, causing them to develop eating disorders.

Starvation becomes a means for some of these people to cope with their anxieties since continuous weight loss appears to be a sign that they are “in control” of the situation they’re in. In the same way, people who suffer from Post-Traumatic Stress Disorder (PTSD) may also overeat as a source of comfort and relief from anxiety caused by their condition.

As researchers studied the causes of eating disorders in diagnosed individuals, it was noted that dieting and cultural ideals have become an increasingly common trigger. Often, people who develop eating disorders would start off with a fad diet, then they would see drastic results.

They would become ‘addicted’ to the results of the fad diet, making them continuously go through periods of starvation to achieve the same effect continuously. The cultural ideals that are seen in the media (both online and in print) may also aggravate this desire to constantly lose weight.

Now that we have understood the common causes of eating disorders, there are several reasons why they can be difficult to overcome. This set of reasons would hopefully provide a means of understanding why eating disorders become a repetitive pattern, and how one can break through this cycle and overcome their condition.

Why are eating disorders hard to overcome?

Eating disorders are a result of formed habits.

As eating disorders start as a coping mechanism, the brain becomes wired to form these unhealthy habits that gives the person relief from the stress or anxiety that they experience. These habits may be a result of months, or even years of regimen–for example, patients with bulimia would have normal meals, but as a form of control, they would purge their food 20 minutes after. According to patients, this gives them a sense of ‘relief’ that they would not gain weight even if they attempted to eat.

Habits are difficult to break once they are hard-set, but if a person recognizes these habits are indeed unhealthy, there is hope for them to replace these behaviors with healthy ones.

Food is also a necessity.

Another reason some eating disorders are difficult to overcome is the other side of the spectrum. Some people restrict themselves with food, and others overeat as a way to cope.

Those who overeat as an eating disorder may find it difficult to control their intake because food is also a basic necessity in life. Unlike drugs, alcohol, or smoking, one can live without these addictions during recovery. However, those who suffer from overeating may find themselves struggling to set limits with their food intake, making the cycle repeat once again.

In order to deal with overeating, there must be a change in mindset that food should be the body’s fuel rather than a source of comfort.

There is a stigma that surrounds eating disorders.

Many people hide their eating disorders because of the stigma that surrounds them. Like depression or anxiety, the high-pressure modern culture gives them the idea that having these mental health issues is a sign of weakness, and rather they should find ways to overcome it themselves.

Thus, some patients who need to be diagnosed and treated as soon as possible keep delaying until they experience life-threatening symptoms. It is important to understand that our brains are also a part of our bodies. Just like having a physical condition, eating disorders also warrant an appropriate diagnosis and treatment system.

Now there are ways to get help on eating disorders, and this can be done discreetly. It takes courage and determination to come out of the light about one’s eating disorder, and like any other disease, people shouldn’t be judged or defined by their condition.

Is there hope for people with eating disorders?

It is important to understand that mental health issues should be given due attention before severe physical symptoms appear. All it takes is a small, single, yet brave step to find a solution and overcome an eating disorder. Some of the steps you can take if you are suffering from an eating disorder include:

Overcoming eating disorders may be an uphill battle, but it can be one of the most liberating recovery experiences you can have. All it takes is to take the first step, take it one day at a time, and know that there is hope and victory that awaits after defeating your eating disorder.