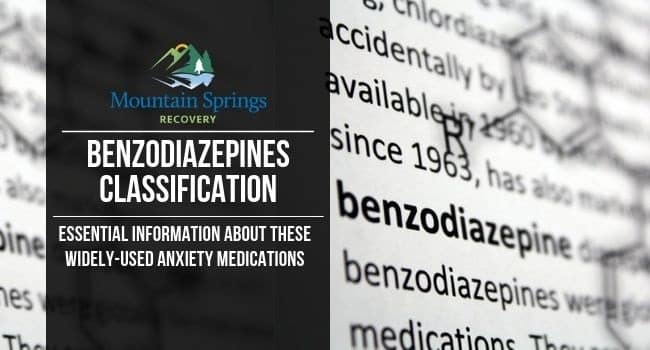 Benzodiazepines are a class of drugs often prescribed for treating anxiety. In addition, these medications can be used for panic disorders, insomnia, seizures, nausea and vomiting, and depression. Some forms of benzodiazepines are used as general anesthesia or to help with pre-surgical anxiety or sedation. Finally, some benzodiazepines have been found to help with agitation associated with alcohol or drug withdrawal.

A list of benzodiazepines that are commonly prescribed include Valium, Tranxene, Ativan, Klonopin, Xanax, and Versed. These medications have almost an immediate effect, making them popular choices for anxiety disorders. Unlike other anxiety medications, such as BuSpar, they can also be taken as needed rather than daily.

Scientists have not determined exactly how benzodiazepines work, but it is believed that the drugs reduce nerve activity in the brain and spinal cord, enhancing the effects of neurotransmitters like gamma-aminobutyric acid (GABA).

Benzodiazepines can produce several side effects. Because they are often used for their sedative properties, grogginess and drowsiness are common. In addition, benzo users might experience the following:

Alcohol should be avoided when taking benzodiazepines as it can enhance the drug’s sedative properties. Increased sedation and cardiovascular depression can also happen if benzodiazepines are used with opioids, barbiturates, phenothiazines, MAO inhibiters, antidepressants, or some illicit drugs like heroin.

Intermediate-acting benzodiazepines include Xanax, Ativan, Restoril, Serax, and ProSom. This classification of medication is also used for anxiety and insomnia, although these medications do not stay in the bloodstream as long as Valium and similar medications.

Short-acting benzos include Halcion, Versed, and Tranxene. These drugs are often used prior to surgery to help the patient relax or are used for acute anxiety.

Unfortuantely, benzodiazepine abuse is a relatively common occurence. Those using benzodiazepines for anxiety treatment might find that they require increasing doses or more frequent doses to feel the same effects as they had been feeling, building up a tolerance. They might even feel that they are unable to cope with everyday stressors without their medication. This is known as dependence, and left unchecked, these increasing doses can lead to an addiction to benzos.

For some people, especially those that have used benzodiazepines for an extended period of time, withdrawal symptoms might occur after the drug wears off. Some of these withdrawal symptoms include increased heart rate and blood pressure, rebound anxiety, seizures, hallucinations, tremors, sweating, and insomnia. To avoid feeling these uncomfortable symptoms, the person might take more of the medication, continuing the cycle of drug abuse.

Benzodiazepine abuse can have a significant impact on the body. Overdosing on the medication can cause shallow breathing, irregular heart rates, slurred speech, irregular eye movements, and even a loss of consciousness. Users can also experience memory issues, a loss of appetite, mood swings, and slowed reflexes.

Withdrawing after an extended period of benzodiazepine abuse should not be done cold turkey. Many of the symptoms of withdrawal can be serious, including psychosis, significant confusion, paranoid thoughts, depersonalization, extreme dysphoria, feelings of unreality, seizures, and cardiovascular issues. For this reason, those that are withdrawing from benzodiazepine use should do so under the care of a professional trained in guiding patients through a gradual weaning from the medication. If the medication is weaned slowly, there is less of a chance of serious side effects.

The right rehab program can help you safely detox from benzodiazepines and get you on the road to living a clean life.