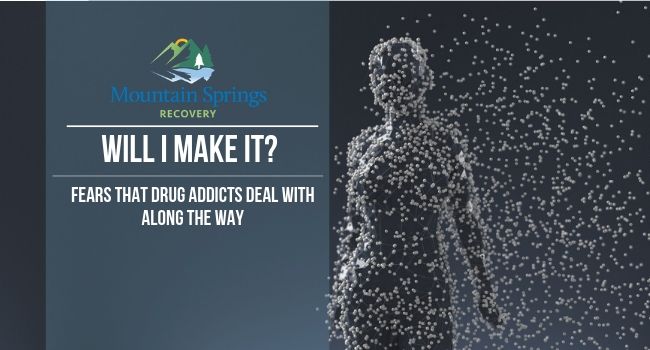 ‘Will I Make it?’ Fears that Drug Addicts Deal with Along the Way

Fighting drug addiction is probably one of the hardest battles of one’s life and so it makes all the sense that an addict would doubt their ability to win this battle. Loved ones usually reach out in a bid to help, but they are shut down by the addict who believes that they can do it alone. While it may appear like the addict is just being a difficulty, they are actually more often than not scared of what awaits them in sobriety being as they may have been living with the addiction for the better parts of their lives.

Addiction and the Fear of Sobriety

When someone has been living with addiction for long, they seem to believe that the habit controls them and they have no way of ditching it. While one may want to stay in this situation for the fear that there is nothing they can do, they have to clean themselves up and start living differently. They also learn over time that keeping up with drug use may be what costs them their lives, eventually. Seeking help and trying to live sober is the first step towards recovery. Also, statistics show that it is possible.

Getting off Drugs and Living Sober

The life of a substance addict can be quite confusing. On the one hand, they could be willing to get better and even take the first steps towards saving themselves. They will be filled with optimism for the future and will look forward to recovery. A few days later, they may retreat into themselves, under the fear of losing their sobriety and falling back into the trap that is an addiction.

An addict’s fear of falling back into addiction is usually based on the fact that they have probably not been sober for the longest time, and so the only life they know is a trigger. They will doubt themselves several times along the way and the only way to succeed is the assurance that they can do it – that and constant supervision.

The three most popular fears among recovery addicts revolve around self-doubt. Most of the time, an addict will put themselves down when they are alone by reminding themselves that they are too deep into an addiction to beat the habit and stay sober. These are some of the things that they will have in mind.

It’s quite easy to dismiss these fears as unfounded, but they hold weight and could prevent anyone from doing anything about their lives. An addict is not only surrounded by triggers, but it has also been established that addicts are prone to addictive behavior. They are therefore likely to get entrapped again if left to their own devices.

While supervision at all times is not the solution – being as one cannot live in an inpatient facility for all their lives – it would help if one’s loved ones made the effort to be supportive. Even though a recovering addict may try to shun the family, keep offering your support and they will eventually take it.

A few things are harder to beat than drug and substance abuse. Matter of fact, attempting to quit alcohol cold turkey and without help could be life-threatening, mostly due to the psychological part. You may be tempted to go it alone, but seeking the help of a professional makes the habit much easier to beat and safe too.

Help is usually not so far as all you need to do is make the resolution and then seek a drug rehabilitation center that suits you. You may be beating yourself down and thinking that you cannot get rid of the habit but that couldn’t be further from the truth. Your new friends at the rehab and beyond will give you the strength you need to stay sober.