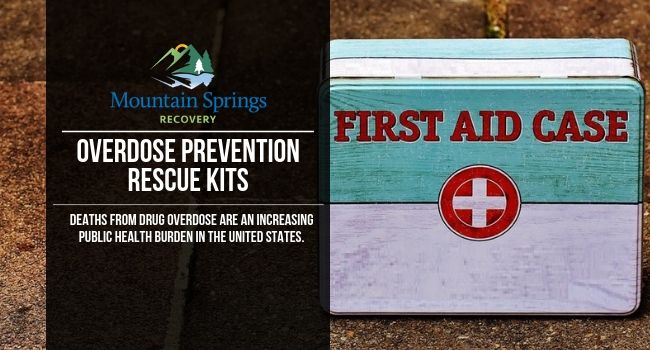 Deaths from drug overdose are an increasing public health burden in the United States. According to the report by the Center for Disease Control and Prevention (CDC), the rate of drug overdose death in the U.S. in 2016 was more than three times the rate in 1999. Statistics also show that within this period over 630,000 people succumbed to a drug overdose and about 66% of these deaths involved opioid. These figures are alarming considering the serious effort of both government and non-government organizations to educate the public on this issue.

Without a doubt staying off recreational drugs and strictly following the doctor’s advice when it comes to prescription drugs, particularly the highly addictive opiates, are the best ways to prevent possible  drug overdose . Unfortunately, some people have a difficult time abiding by these basic rules, but if worse comes to worst, you can still rely on naloxone overdose prevention rescue kits.

What is the Content of a Naloxone Overdose Prevention Rescue Kit?

What is Naloxone and What Drugs Does It Counteract?

Naloxone is a medication widely known as an “opioid antagonist” because it generally counters the effects of opioid overdose such as heroin and morphine overdose. This drug is effective in addressing suspected opioid overdose with respiratory and/or central nervous system depression; thereby helping the overdose victim to breathe normally.

It is important to note that naloxone is only effective if the person has opioids in his system, otherwise, it does not have any effect. Naloxone is a non-addictive prescription medication that can be administered even by minimally trained people. This is the reason why naloxone is effective in treating overdose in people who have been using various types of opioid drugs such as pain medication and heroin.

A pre-post study conducted in Scotland to assess the effectiveness of its National Naloxone Program (NNP) also revealed a significant decline (36%) in opioid-related deaths. Another study in 2016 showed that co-prescribing naloxone rescue kits to patients treated with opioids for chronic pain reduces opioid-related adverse events. All these studies support the effectiveness of naloxone overdose prevention rescue kits.

How to Administer Naloxone?

Contrary to what you usually in movies wherein people who overdose die quickly, overdose is actually a slow process that may take a few minutes or even a few hours. Many of those who overdose survive primarily because someone was there who knew how to respond to an opioid overdose. Below are the basics in administering naloxone:

It is important to note that if the second dose of naloxone does not revive the person, it is either the heart has already stopped, there are no opioid in the person’s system, or the opioids are unusually strong (e.g. Fentanyl) and require more dosage of naloxone. Should this happen, it is critical that you call 911 immediately!