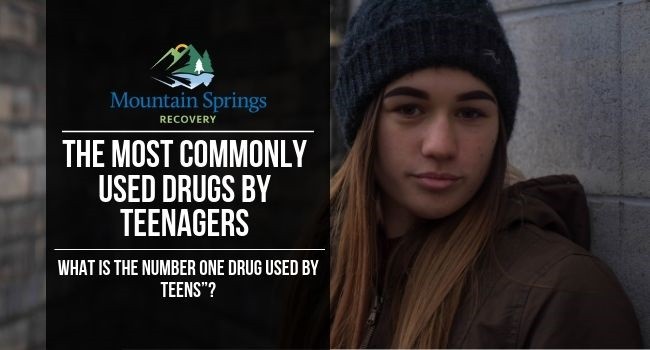 The Most Commonly Used Drugs by Teenagers

Drug use among teenagers has become a major problem. People who begin taking drugs during their adolescent years are more likely to become addicted than those who begin using as an adult. During your teenage years, your body and brain are in a vital stage of development. Compared to the adult brain, the teenage brain is still very immature, especially the part of the brain that controls impulses. This makes it more likely for juveniles to try drugs in the first place and it makes them more susceptible to addiction.

There are many reasons adolescents choose to take drugs: peer pressure, stress, confidence, etc. These types of scenarios are much too familiar for teenagers today. The number of children/young adults that are abusing drugs is increasing at a frightening rate. Many are turning to drugs to deal with the problems in their lives, while others do it for recreation. Statistics show that within one year, between 2010 and 2011, the number of synthetic drug-related visits to the emergency room increased by 230 percent.

You may wonder, “What is the number one drug used by teens”? Here are some of the most popular teenage drugs:

Alcohol is among most of the popular teenage drugs. Virtually every drug that is abused by adults is abused by teenagers as well. Letting a child drink alcohol while under the legal age may not seem like a big deal, especially if you know where and what they are drinking; however, research proves that if a child begins drinking under the age of 15, they are four times more probable to become alcoholics compared to their counterparts who wait until they are of age to start drinking. The age group that has the highest alcohol usage rate are those kids in 8th, 10th, and 12th grade. Teenagers who drink are more prone to having problems in school and/or with their peers, development issues with their brains, legal issues, use of other illegal substances, and death by alcohol poisoning.

The use of marijuana and abuse of marijuana has increased greatly over the past few decades. It is now the most used illegal drug across the globe. A study taken of high school seniors showed that 45% of students had tried marijuana within their lifetime and that 36% of them have used within the last year. Smoking pot has led to some very serious health problems. The main ingredient in marijuana in THC. This chemical substance can remain in your body for months and can cause damage to the user’s immune system. If you use this drug too heavily, it can cause brain damage and even abnormalities. Teenagers who smoke marijuana are more apt to turn to harder drugs. One statistic showed that over 99% of cocaine users started off using pot.

Tobacco is a drug that is known for being extremely addictive. It is found in cigarettes and contains the psychoactive ingredient of nicotine. While it is illegal for anyone under the age of 18 to smoke, the rate of teenagers who smoke continue to rise. Tobacco is one of the leading causes of cancer, whether you’re the one smoking or you just breathe in second-hand smoke. The younger the smoker, the more likely they are to become addicted and use more illicit drugs in their life.

Prescription drug use is becoming much more common among teenagers today. Adderall, OxyContin and other pain killers are among the most popular teenage drugs. There is a huge misconception many young people have regarding prescription drugs. They believe that these drugs are “safe” because they were given to them either from a doctor or a pharmacy. This belief is inaccurate; prescription drugs come in many strengths and combinations, and often the user has no information on the drug nor the potential side effects. Also, these types of drugs are prescribed for one specific individual for their specific needs. If someone takes a drug not prescribed for them, it can just as dangerous as any type of street drug.

While not as popular today, hallucinogens are still commonly used among teenagers who are looking to trip. Hallucinogens are very dangerous, especially when used by younger people. The reason for this is because they change people’s personalities rather than just their mood. When you are young, every part of you is still developing and hallucinogens can have a negative influence on your own feelings, thoughts, opinions and personality.

The psychoactive drug distorts reality and kills some cells inside the brain. While LSD can bring people joy, it can also cause a “bad-trip.” A “bad-trip” causes feelings of intense fear, panic or worry about insanity or death that can last anywhere up to 12+ hours. Ecstasy is another popularly used hallucinogen. If kids are under the influence of this drug, it causes them to make bad decisions about sex. This drug also oppresses the natural alarm signals your body gives out. MDMA is the chemical used in ecstasy. It is important to know that MDMA could also contain other hard drugs like cocaine or other toxic elements, so you never know for certain what you are digesting into your body.

These are some of the most used drugs by teens. Drug abuse among teenagers is a problem that continues to grow. The best thing for you to do as a parent or an adult, is to educate children at a young age about the dangers of drug use and offer addiction treatment as necessary. Although the truth can hurt or be scary, kids must be told about the effects and hazards of drugs and where they can go to get help if needed. Don’t shy away from this problem. We must hit it head on and address the situation we are facing today.

Drug addiction treatment is available for teens, so if you are struggling, or a friend or family member, please reach out for addiction help.

Our Response to The Corona Virus Health Concern