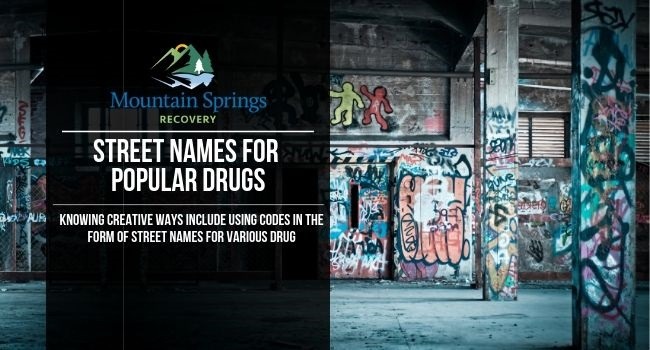 People who abuse drugs and illegal substances are quite creative when it comes to hiding their habits, be it from their loved ones, the police, or other people in authority (teachers, employers, etc.). Some of these creative ways include using codes in the form of street names for various drugs and substances they abuse.

For example, skippy, speed, uppers, and hearts are some of the popular street names for stimulants. By using these names, people suffering from addiction are able to buy drugs or even discuss their abuse habits secretly. As a result, people can go for a long time without realizing their loved ones are addicts, which makes it much harder to help them. Therefore, it is a good idea to learn some of the popular street names for various drugs, which will help you to detect drug abuse and addiction problems with your loved one.

Below are some of the most popular code names for various drugs and illegal substances that are found on the streets.

Cocaine is a stimulant drug that comes in the form of a white powder, which delivers a burst of energy and euphoria when snorted, smoked, or injected. It is one of the most notorious illegal substances found on the streets due to its highly addictive nature. Cocaine addiction can also lead to fatal health problems such as reproductive damage, seizures and convulsions, stroke, heart attack, and even death. Common street names for cocaine include coke, nose candy, rock, blow, C, crack, and white.

Ketamine is a dissociative drug that is usually used as an anesthetic for animals. It is used recreationally for its hallucinogenic properties, which makes the users “feel out of control” or detached from the reality.

Ketamine is not as popular or potent as hard drugs such as cocaine. Nonetheless, it is still a dangerous substance, and ketamine addiction can lead to problems such as impaired motor function, severe anxiety, high blood pressure, respiratory problems, and others. Because ketamine is very popular in clubs and party settings, it is also sometimes used as a  date rape drug.

Heroin is an opiate drug that comes from morphine. It is one of the most common recreational drugs in the world, and it is abused for its euphoric properties. Heroin is considered to be one of the most dangerous drugs due to its highly addictive nature and severe side effect. Some of the long-term side effects of heroin abuse include kidney and liver disease, mental disorders, lung complications, collapsed veins, and others.

PCP, also known as phencyclidine, is an illegal street drug that is abused recreationally for its dissociative and hallucinatory effects. The abuse and addiction to hallucinogens such as PCP is a huge problem, as it encourages risky behavior and usually leads to adverse problems such as overdose and death.

Some of the most commonly abused prescription drugs and their street names include: Xanax, (Bricks, Z-Bar, and Benzos), Valium (Blues) and OxyContin (Oxy, OC, O, and kickers)

Flunitrazepam is a depressant drug that is found in the streets under the brand name Rohypnol. It is a type of benzodiazepines (drugs with sedative effects), and it is commonly used recreationally in party scenes, where it goes by various club drugs street names such as roofies, rope, rophies, and forget-me pill.

Flunitrazepam and other benzodiazepines are highly addictive and can lead to serious side effects, especially when mixed with alcohol and/or other drugs. Also, due to their sedative effect, these drugs can lead to sexual assault and are sometimes even used as date rape drugs.

Amphetamine is a stimulant drug that is used to treat ADHD, obesity, and narcolepsy. However, it is one of the most commonly abused substances due to its stimulating effects. Amphetamine is a highly addictive drug and long-term use can lead to serious side effects such as suicidal thoughts, violent mood swings, severe weight loss, ulcers, and others.

The drug, which comes in the form of a powder or tablet, goes by a number of various stimulant street names such as uppers, hearts, beans, truck drivers, and crosses.

MDMA (methylenedioxymethamphetamine) is a psychoactive drug that is known to most people as ecstasy. It is mostly used for recreational purposes due to its hallucinatory and stimulating effects. It is very common in clubs and party scenes and is considered to be one of the most popular club drugs. Common street names for ecstasy include Molly, Adams, E-bomb, Eve, peace, and love drug.

Methamphetamine is a stimulant drug that is used in limited cases for treating obesity. However, an illegal version of the drug is found in the street in crystal form, which is popularly known as crystal meth.

Crystal meth is in the same class of drugs as cocaine (stimulants). However, it is considered to be an even more potent and dangerous street drug than cocaine. Crystal meth is also one of the most addictive illegal substances due to the huge “crash” the users get when the high ends.

Crystal meth goes by various slang names on the street, which include crack, ice, fire, and speed.

GHB (gamma-hydroxybutyrate) is another popular psychoactive drug that is popular in the club scenes. People who use GHB consider it to be fun due to the euphoric feeling it gives them. The drug is also reported to increase the sex drive of users, which makes it an even more enticing club drug. However, GHB abuse has serious side effects, which can even be fatal when the drug is mixed with alcohol or other substances.

GHB goes by a number of street names such as liquid ecstasy, scoop, liquid X, and soap.

Drug users most often use the above slang names for drugs to hide their habits from their loved ones. However, by learning some of these names, you can be able to detect the problem early enough and help your loved one before it is too late for them.